IS IT TIME TO DIE? 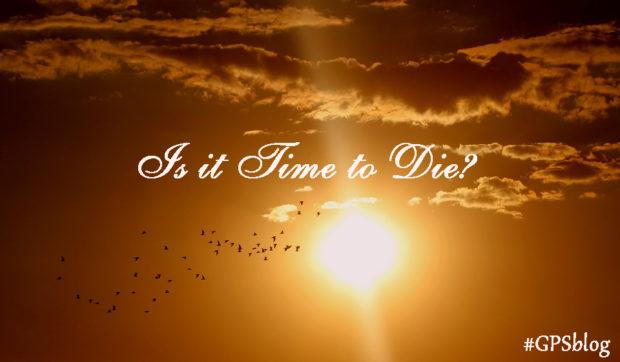 For twenty five years I have been preparing estate planning documents for clients which documents usually include an Advanced Directive (AD) (also known as Living Will). An AD, in short, is a simple statement that says if there is no longer any medical help for me, then I want to be allowed to die a natural death. It isn’t until now, twenty five years later, that I truly recognize how simple or difficult this decision may be when the time comes. When there are extreme medical issues, the decision to implement yours or your loved one’s AD is easy. However, how about the person who is elderly, completely competent their body is failing but the conditions may or may not have “extreme moments” that come and go. I have an elderly father whose health is failing. He has an AD and continues to state that he wants to die. He is in a skilled nursing facility and his quality of life is minimal. He is still alert and engaging, eats fine, can have very complex discussions, but he is not happy and his body is failing. However, I am not sure if he is not ready to die, or doesn’t recognize when potential, naturally occurring opportunities to allow him to die present themselves even though I have tried to professionally, tactfully and compassionately let him know it is an opportunity without actually stating the obvious. The first opportunity arose when an infection had claimed his right foot. He could have allowed it to progress and nature would have taken its course which was his original choice, but he then reconsidered and chose to amputate and things were improving for a while. For the past year he came down with several other infections that, if allowed to proliferate, each could have been an additional opportunity to fulfill his stated desire. Each time he chose to treat the infection, and he continues to struggle. He recently learned that an infection is proliferating in his left foot and the doctors have recommended amputation, but this time he refused again stating he wants to die. However, once again, what seems contrary to his stated desire, he continues to take antibiotics to slow the spread of the infection. Sooner or later the infection will win unless he changes his mind and decides to amputate. It is his life, he is fully competent and my family and I continue to support his decisions as difficult as they are for him to make, for us to see the effect of each and how it affects him and for us to ride the emotional roller coaster that accompanies such difficult times. If it were you in his shoes, would you recognize these “opportunities”? Which decision would you make? I am not really sure any of us will really knows the answers to these questions, even though we may currently think we do, myself included, until the time comes.

As a final point, one always has control over whether they want to continue to eat. Making the decision to no longer eat will bring about the natural and intended end and I have had clients make that conscious decision taking control of their life and their death as best they could.

My Father passed less than 24 hours after writing this.